Vitamin D supplementation does not improve symptoms in people with psychosis, study finds

New research involving 149 participants found no evidence that vitamin D supplementation taken over six months improves mental or physical health symptoms in people with psychosis. Participants did however show high rates of vitamin D deficiency which could have longer term health impacts not captured in the study, according to researchers.

The DFEND Trial, published in JAMA Network Open, involved 149 participants with early psychosis, who were randomised to receive vitamin D or a placebo for six months.

While the study showed no evidence of vitamin D supplementation improving physical or mental health symptoms, it revealed 74.6 per cent of participants had insufficient or deficient vitamin D levels, with that figure rising to 93.4 per cent among ethnic minority participants.

Vitamin D deficiency is more common in people with psychosis than the general population. This is thought to result from poor general health associated with inactive lifestyles, less exposure to the sun and poor general nutrition. Animal experiments have linked low vitamin D with changes in the brain, triggering speculation that vitamin D supplementation could improve mental health.

No previous studies have examined vitamin D supplementation in people with first episode psychosis, a group with high rates of vitamin D deficiency (42 per cent) and who may be more responsive to supplementation than those with established psychosis. 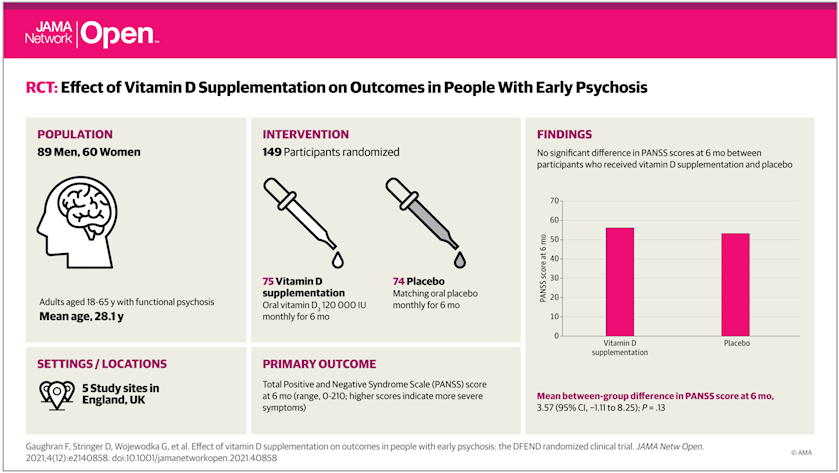 “While we didn’t show any effect of supplementing with vitamin D on mental or physical health over a six-month period in people with early psychosis, the rates of vitamin D insufficiency and deficiency in the group overall were very high, this state being almost universal in participants from Black or other minority racial or ethnic groups. Giving the vitamin D supplements increased vitamin D levels and was safe.

“These very high rates of vitamin deficiency and insufficiency may have longer-term negative health impacts which we have not measured, so raising awareness of the need to optimise vitamin D in people with psychosis is important. Future public health strategies should acknowledge the high risk of vitamin D insufficiency and deficiency in people with psychosis and consider any reasonable policy adjustments which may be needed to address this over and above general population guidance.”

The researchers assessed participants after three and six months to check for any changes in their psychosis symptoms, with mood, function and cardiometabolic risk factors also measured at six months.

“While animal studies indicate that low vitamin D during adulthood can alter brain functioning, the DFEND study did not find evidence that vitamin D supplementation helped people with early psychosis. This is disappointing, but we will continue to look for new candidate treatments for psychosis – this can be a very disabling illness and our current treatments are suboptimal.”

The paper ‘Effect of Vitamin D Supplementation on Outcomes in People with Early Psychosis: The DFEND Randomised Clinical Trial’ was published in JAMA Network Open. doi:10.1001/jamanetworkopen.2021.40858