The genetic risk of inheriting depression is doubled for people who report having been exposed to trauma, according to a new global study led by researchers at the National Institute for Health Research (NIHR) Maudsley Biomedical Research Centre.

Both environmental and genetic factors influence depression, and depression is known to be more common in people who have been exposed to stressful life events and early-life trauma. However, the relationship between these traits, including the role of genetic risk factors, is complex and poorly understood. Previous studies have found that many types of depression are polygenic, meaning potentially thousands of genetic variants with very small individual effects contribute to the risk of developing the illness.

Conducting large scale studies in this area has, until now, been complicated for a number of reasons. Combining datasets is fraught with difficulty as methods for measuring trauma vary a great deal, and retrospective measures of trauma can be very subjective and influenced by current mood. However, the release of data from mental health questionnaires by the UK Biobank in 2017 presented the opportunity to study the relationship between genetic variation, risk for depression and reported trauma exposure in a single large cohort.

In this study, UK Biobank data from almost 130,000 people were studied to examine the relationship between the genetic risk factors for trauma exposure and depression, looking at those people who do and do not report exposure to traumatic events. 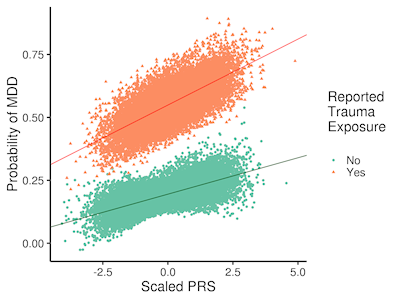 The study was led by Professor Gerome Breen from the NIHR Maudsley Biomedical Research Centre and the Institute of Psychiatry, Psychology & Neuroscience at King’s College London. He commented: “This is a complex topic and requires careful thought. People at increased risk of depression have been found to be more likely to report events as stressful or traumatic.

This could be due to individuals with depression being exposed to higher rates of traumatic events, or due to them experiencing or remembering such events as more traumatic than those without depression. Either of these mechanisms could be influenced by psychological factors such as cognitive biases that influence how individuals interpret what happens around them, which we know are partially under genetic influence.

Dr Jonathan Coleman, first author on the study, said: "The fact that there are substantial genetic influences on many factors that increase risk of adverse traumatic events – such as higher body mass index, lower education attainment and lower socioeconomic status – is important. The increased heritability of depression seen in those who also report trauma could reflect the genetic influences on these factors, as they place individuals at greater risk of experiencing trauma in the first place."

The research was published today in the Nature journal, Molecular Psychiatry.