Bringing mental health education to a classroom of 300

More than 300 school pupils from across London took part in a unique mental health lesson on 13 October.  The event was devised by poet and astronaut-in-training Hussain Manawer. 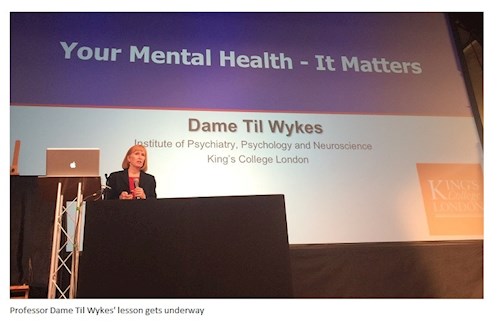 The lesson itself was led by Professor Dame Til Wykes, who leads the Patient and Carer Involvement Theme of the NIHR Maudsley Biomedical Research Centre in Mental Health at the South London and Maudsley NHS Foundation Trust and is the Professor of Clinical Psychology and Rehabilitation at King's College London.

Professor Wykes addressed 325 school pupils aged from 11 to 18 for an hour, covering topics including dealing with depression, the effects of stigma and how best to maintain good mental health.  There were also contributions from special guests, including musicians, artists and actors.

Speaking before the event, Hussain – whose YouTube channel Hussain’s House has over 10,000 followers – commented, “Growing up in this day and age can be difficult. People nowadays have new challenges to contend with like social media, body image and physical appearance and even cyber bullying. Mental health education is crucial to help many get through the early stages of their life and I am a great believer in mental education to be put on the national syllabus.”

Three quarters of the pupils completed a short survey about the day, and more than 90% wanted to learn more about mental health after the lesson, and a staggering 95% thought that mental health should be taught in schools.

Pupils who attended commented that, “Teaching people mental health would help to stop discrimination and stigma,” and “Schools should spend more than one day a month on helping people with mental disorders”.

Professor Wykes is involved in numerous initiatives to promote the importance of young people’s mental health, and Hussain Manawer is also actively campaigning in this field, with many more events and engagements planned for the coming months.

Another lesson is being planned to meet Guinness world record requirements, with an even higher number of pupils attending, to deliver the largest mental health lesson in the world.