Using MRI to investigate the brain response to inflammatory stimuli

Dr Etta Nettis is a psychiatrist at South London and Maudsley NHS Foundation Trust and recently completed a PhD at King’s College London funded by the NIHR Maudsley Biomedical Research Centre. Here she talks about her fascinating research that is investigating the use of MRI scans to assess inflammation in the brain and its connection to depression.

Think of a person close to you who suffers from depression. I am sure that the first thing that comes to your mind is that depression is a mental disorder. Correct… but have you ever considered that depression, like other psychiatric disorders, could be a problem of the body, too?

We are inclined to think that suffering from low mood, poor motivation, insomnia, and several other depressive symptoms have nothing to do with our body. However, science has consistently shown that there is a precise biological mechanism explaining the connections between body and mind (i.e., physical illness and depressed-like behaviour) in some people suffering from Major Depressive Disorder (MDD).

A major part of my research is based on the evidence that, in some people, depression is associated with an increased activation of their immune system.

How does the immune system affect the brain?

When inflammation is triggered by an infection or from an external stressor, the immune system releases a series of proteins — the inflammatory cytokines — into the blood stream and in the tissues. These act like messengers between different organs that have the aim of alerting the body to fight.

Recent studies in animals have indicated that inflammatory cytokines can reach the brain by going through the blood-brain barrier, a border of cells separating the brain from the rest of the body. This leads to a general condition of brain inflammation and can disrupt the functioning of different brain areas, such as the hippocampus, which is involved in the adjustment of emotions, motivation, learning and memory. Finally, this is followed by the development of depressive-like behaviour.

Why is this important?

If inflammation can go from the body to the brain and lead to the development of depressive symptoms, then reducing inflammation in the body and the brain might help treating depression. This could be a particularly important development for people with MDD who do not respond to standard antidepressants and have treatment-resistant depression.

Before developing these treatments it would be useful to identify if there is a group of people among those who suffer with MDD, who also present increased inflammation alongside this. The question is how do we identify them?

MRI is considered to be less specific than PET in detecting brain inflammation, but it is much cheaper and less invasive for participants (since there is no radiation involved). We wanted to compare the two techniques in the context of the same study.

Together with a team of neuroscientists and neuroimaging researchers led by my supervisor Dr Valeria Mondelli at King’s College London, we conducted a study called FLAME, partly funded by the NIHR Maudsley Biomedical Research Centre. Its aim was to trace inflammation in its journey from the body to the brain by triggering temporary inflammation in healthy men.

We recreated the conditions of inflammation in seven healthy male volunteers by administering a drug called Interferon-alpha. This drug causes the immune system to produce a temporary state of mild inflammation, which lasts up to 72 hours. A single injection of Interferon-alpha is quite safe, producing mild flu-like symptoms which can be easily treated with paracetamol (the study was approved by an ethical committee and all participants gave their consent to take part before starting; their health was not compromised in any way).

Due to some technical aspects, PET imaging was not able to detect the presence of brain inflammation. Indeed, the hard part of science is that sometimes results do not meet expectations. However, they can shed new light on other aspects that are equally important for research (the PET results are discussed in another publication that you can find here).

On the other side, MRI was able to show some changes in the brain of our participants after the injection of Interferon-alpha, which could suggest the presence of inflammatory processes.

In the FLAME study, the injection of Interferon-alpha and the associated inflammation in the body as measured in the blood were followed by increased values of T1 in brain MRI. This could indicate an increased amount of water in brain tissue (known as oedema), which is a well-known consequence of inflammation. This was found specifically in the hippocampus which, as stated above, is an area of the brain that is particularly involved in the development of depression. Interestingly, those with a greater degree of “body” inflammation (measured by the blood tests) showed the greatest T1 values in the hippocampus, suggesting that the two mechanisms are somehow related. 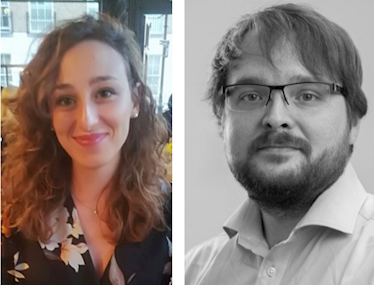 Our study, with myself and Dr Andrew Lawrence as first authors (pictured right), was published in Brain, Behaviour  & Immunity - Health. The study was done on a very small sample of subjects and so should be considered only preliminary. Moreover, MRI is assessing the inflammatory response in the brain indirectly, by measuring the effect of inflammation on water and tissues. But if these findings are confirmed in future (larger) studies, these data would highlight the potential of MRI to indirectly investigate inflammatory processes in the brain, in a cheaper and less invasive way than PET.

This would allow early identification of people who have both depression and increased inflammation, especially among those who are not responding to antidepressants, and make them eligible candidates for additional treatments, including anti-inflammatories.

Our findings add to growing evidence that psychiatric disorders, including depression, are overall medical disorders, and body and mind are definitely in this together!