The NIHR Maudsley Biomedical Research Centre (BRC) screened a collection of short films on Thursday 16 May, all examining personal stories of addiction and recovery.

The six three-minute films featured were a selection of those shortlisted for the 2018 Recovery Street Film Festival, which had the theme of ‘My Lightbulb Moment’. 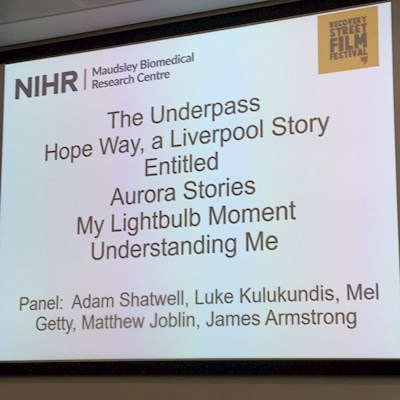 The Festival focuses on filmmakers with lived experience of recovering from drug or alcohol addiction, whether their own or that of a loved one. The aim is to demonstrate, through the medium of film, the diverse issues that are faced by people overcoming addiction and how those around them can be affected. The Festival empowers those affected by addiction by giving them a voice and providing a platform for them to tell their own stories of the ‘ups and downs’ of recovery.

The six films screened were titled:

Many of the films are available to watch on the Recovery Street Film Festival YouTube account. The public availability of the films is central to the Festival’s mission, with the idea being that anyone can share these stories and host their own screening event.  The BRC was particularly pleased to be able to show Aurora Stories, which was an initiative by the BRC Addictions Service User Research Group, based at the Aurora Project, Lambeth.

The films were followed by a panel discussion and Q & A, chaired by Dr Sally Marlow, Public Engagement Fellow at the Institute of Psychiatry, Psychology & Neuroscience and BRC Research Champion for Impact and Engagement. The panel featured some of the filmmakers and festival coordinators who shared their own experiences and explored the ability of shared creative projects to connect with audiences and tell stories of addiction and recovery.  The audience was a mixture of staff, students, those in recovery and members of the public, and the frank and powerful Q&A was followed by a networking reception.

The panel members were:

Adam Shatwell, a former client of Steps2Recovery who has remained drug and alcohol free since August 2018. Adam co-produced the film ‘My Lightbulb Moment’.

Luke Kulukundis, a filmmaker from Foreign Body Productions, who helped Adam and others co-produce the film ‘My Lightbulb Moment’.

Mel Getty, CEO of the Aurora Project, a recovery charity set up by a group of individuals that went through treatment for substance and/or alcohol use treatment.

Matthew Joblin, founder and managing director of The Creative Colony, a film production company which set up a Community Film Unit to train young people and help public or third sector organisations make films and tell stories about society’s most important issues.

James Armstrong, Director of Innovation and Marketing at Phoenix Futures, the recovery charity behind the RSFF which is dedicated to helping individuals, families and communities recover from drug and alcohol problems.

Commenting on the event Dr Sally Marlow said: “Recovery Street Festival Film is a unique initiative, helping people with lived experience of addiction and recovery to channel that lived experience into something creative, with the power to help others with their recovery, to fight stigma and to change attitudes.”

“It was a real privilege to be able to screen some of these deeply moving short films. I hope everyone who attended found the experience as inspiring as I did and I thank all the panel members and the audience for their time and their thoughtful contributions to the discussion.”

For more information about the Recovery Street Film Festival visit their website. The submission deadline for entries to the 2019 Festival is Wednesday 1 August.

Tags: Public engagement - Substance use and harms - Patient and Carer Involvement and Engagement -