ADHD Awareness Month takes place every year in October, to raise awareness and improve understanding of Attention-deficit/hyperactivity disorder (ADHD), which affects around one in 14 children worldwide.

The condition impacts a person’s behaviour, and can be characterised by a poor attention span, difficulty concentrating and impulsivity. Most cases become evident and are diagnosed in children between 6-12 years old, and for a large percentage of people their symptoms carry on into adult life.

The NIHR Maudsley Biomedical Research Centre funds a Child and Neurodevelopmental Disorders research theme which focuses on improving early diagnosis and evaluating novel therapeutics for a range of conditions, including ADHD. Researchers have been developing a potential new treatment called fMRI-(functional magnetic resonance imaging) neurofeedback. This could present an effective alternative to current medicines which can have unwanted side-effects and can become less effective over time.

Brain imaging studies have shown that problems with attention, impulse control and motivation are associated with differences in brain structure and function. This new treatment, fMRI-neurofeedback, consists of a fun computer game which trains the brains of children with ADHD during brain scanning. During training, the children receive feedback about when their brain activity increases, shown as a rocket moving in the video game.

In the study young people with ADHD were trained to control the area of the brain responsible for self-control and attention (right frontal cortex) during scanning. After four hours of training sessions, researchers found children with ADHD learnt to control their brain activity and performed attention tasks better. 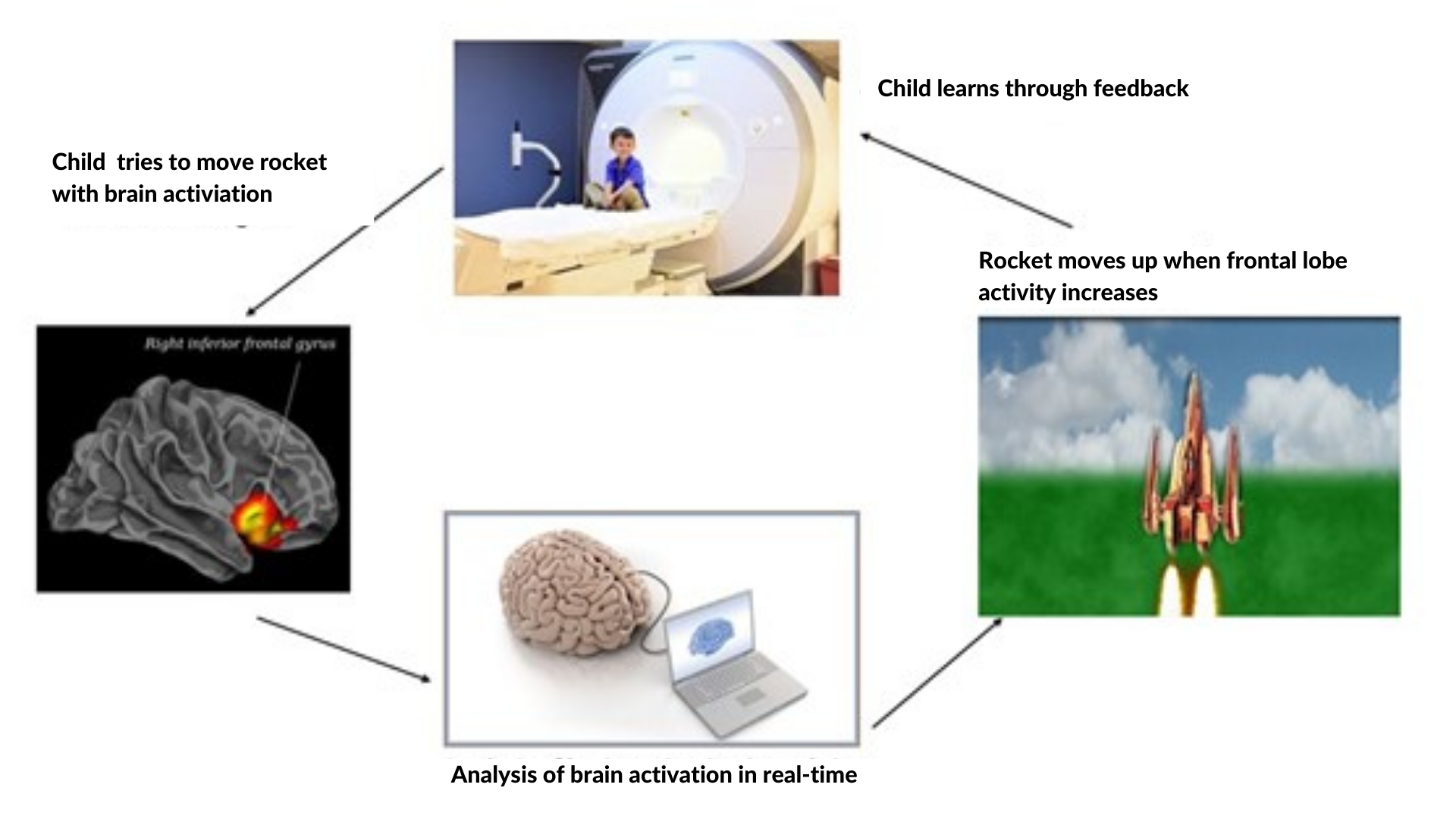 Initial results suggest long-lasting benefits with no side effects

Training resulted in improvements in ADHD symptoms in all participants, but only those asked to control activity in the right frontal cortex became better at specific attention tasks. It was also only these children who showed improvement in ADHD symptoms a year after the training, suggesting there are longer-lasting benefits of neurofeedback.

Brain imaging research showed that the group asked to control activity in the right frontal cortex had stronger connections within areas of the brain (networks) responsible for attention and self-control, with reduced activity in networks for ADHD-related ‘mind-wandering’. In this 2020 study, children who initially had better brain-activation in self-control regions responded better to the treatment, suggesting certain groups of children may be more suitable for neurofeedback learning. There were no side effects.

“Research into brain therapies is trying to discover new and safe drug-free treatments for ADHD. Brain therapies are very much in their infancy, but they have the advantage that they target the key brain mechanisms that we found to be different in children with ADHD in the past three decades of neuroimaging. They are also relatively safe and could potentially lead to longer-lasting brain changes in ADHD.”

The study led to Medical Research Council funding of £1.3M for a larger trial with 100 children with ADHD. This will compare fMRI-neurofeedback to placebo that is not related to their own brain activity. The work also led to new collaborations locally and with the National Institute of Mental Health and Dresden University. The team has since secured funding (approximately £2M from NIHR, Action Medical Research) to trial other brain-based therapies in ADHD, including different types of non-invasive brain stimulation treatments such as transcranial direct current stimulation (study published in July 2021) and stimulation of the trigeminal nerve which is responsible for sensations in the face.

Going forward, these brain-based therapies could potentially lead to safe, longer-lasting, drug-free alternative treatments for ADHD, that are likely to be preferred by parents, patients and clinicians.

ADHD Awareness Month across the IoPPN and SLaM

Our researchers work with world-leading experts across the Department of Child & Adolescent Psychiatry at the Institute of Psychiatry, Psychology and Neuroscience, King’s College London (IoPPN) and the Child and adolescent mental health services at the South London and Maudsley NHS Foundation Trust (SLaM).

The South London and Maudsley NHS Foundation Trust offers a specialist, national service for the treatment of ADHD. Its Outpatient Clinic provides assessment and treatment for adults with ADHD, and since its inception in the early 1990s, it has provided diagnostic assessments for over 2000 people.

SLaM will be sharing patient stories and information about its services on social media this month.