CRIS has been an integral part of our research into the COVID-19 pandemic.

The COVID-19 pandemic had wide and unforeseen consequences across health sectors. These included profound effects on mental health and mental health services. CRIS played an important role to play in helping us understand these effects and improve care.

Since the lockdown began the CRIS team have worked to turn around research activity and focus this on the pandemic and its consequences for people using mental health services.

As well as setting up a number of studies, they have prioritised a series of initiatives to improve the usefulness of CRIS data. These included seeking permission for regular updates from the Acute Trust partners on emergency or hospital care by South London and Maudsley NHS Foundation Trust service users over the pandemic period, as well as making good use of the CRIS data linkage already set up with local GP records.

Read Professor Robert Stewart's blog on CRIS in the time of coronavirus to see more about how CRIS is being used.

Preprints publications are research papers that have not been peer-reviewed or accepted by traditional academic journals. The benefits of pre-prints are that study information and data can be made publically available in a shorter timeframe however findings and conclusions have not been reviewed by other independent scientists as they would in a post-print published journal paper.

Causes of death in mental health service users during the first wave of the COVID-19 pandemic: South London and Maudsley NHS Foundation Trust data from March to June 2020, compared with 2015-2019

The CRIS team have analysed the recorded underlying causes of death in SLaM service users for March-June in 2020, coinciding with the peak of the first COVID-19 wave in London, comparing data to causes from the same four-month periods in 2015-2019.

There were 2561 deaths in March-June 2020, an excess of 1109 compared to previous years. There were a total of 708 deaths in 2020 with COVID-19 as the identified underlying cause, accounting for 63.8% of this excess. The remaining excess deaths were in the unnatural/unexplained category and caused by a mental/neurological disorder, with other causes showing no consistent excess. 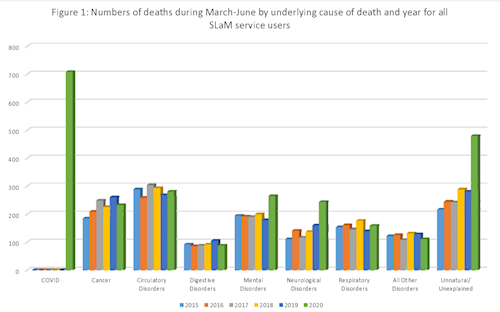 For other analysed categories:

“We think that this information from SLaM may be unique for England for some time to come, because we don’t believe there are any other Mental Health Trusts with this data currently available.

As well as the COVID-19 related deaths which accounted for 64% of the overall excess in 2020, there are clearly concerns around the higher deaths attributed to dementia and the large number of unexplained deaths currently awaiting coroner inquests, which will include those due to suicide. No excess was seen in deaths due to physical illnesses like cardiovascular disease or cancer, but we’re only looking at the four months around the first wave of the pandemic here, and we don’t know what the longer-term consequences will be.”

Lockdown and social distancing due to COVID-19 are likely to have had widespread impacts on mental healthcare service provision and use. In these two studies, our researchers quantify activity for individuals with neurodevelopmental disorders and personality disorders.

Comparing periods before and after the 16th March 2020: 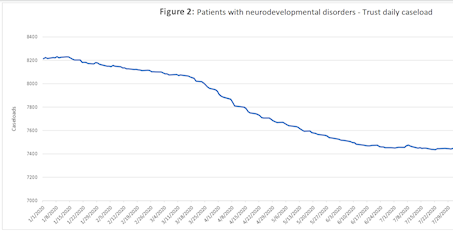 Professor Robert Stewart says: "We wanted to describe the experiences of both of these groups because they are often a little lost in general mental healthcare statistics.

Both groups clearly experienced substantial changes in their contacts with mental healthcare over what was a challenging period.

The higher mortality rates are clearly very concerning and need further attention, particularly as we enter a second wave of the pandemic."

Comparison of mental health service activity before and shortly after UK social distancing responses to the COVID-19 pandemic: February-March 2020

Inpatient numbers fell 13.6% after 16th March, and daily numbers of deaths increased by 61.8% during that period.

"We are putting this information in the public domain, as it describes a very early point in the first wave of the pandemic which presented substantial challenges to mental healthcare. We were pleased to be able to turn around the manuscript very rapidly at the time, although had less satisfactory experiences with conventional publication routes which have been influential in the alternative means of dissemination being trialled on this site."

The COVID-19 pandemic has been accompanied by excess all-cause mortality at a national level. CRIS researchers previously described a 2.4-fold excess mortality in past and present SLaM service users during the period of the pandemic from 16 March to 15 May 2020 to that for the same period in 2019. In this pre-print our researchers compared mortality within specific ethnic groups. 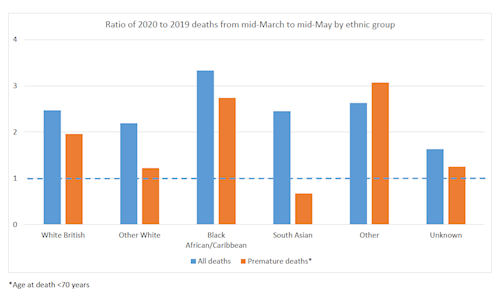 When examined by recorded ethnicity, the ratio of total deaths between the two years was highest at 3.33 in Black African/Caribbean patients and those from other ethnic groups at 2.63, compared to 2.47 in White British patients.

Considering premature deaths (age at death below 70), 2020:2019 ratios were 3.07 for other ethnic groups and 2.74 for Black African/Caribbean patients compared to 1.96 for White British patients.

"Unfortunately these figures speak for themselves and show the sizeable inequalities in mortality that have been described at a national level. I could say that the results are unsurprising, but then perhaps the problem is that we’ve stopped feeling surprised. Clearly this is as much a challenge for SLaM as for everywhere else." 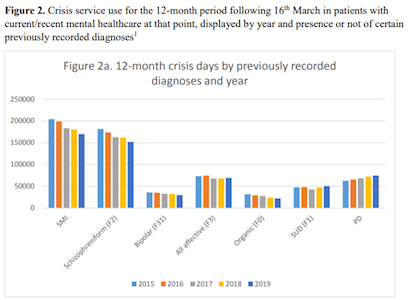 Using past and current data to estimate potential crisis service use in mental healthcare after the COVID-19 lockdown: South London and Maudsley NHS Trust data

The CRIS team have estimated service use by those most likely to receive crisis care in the 12 months following UK COVID-19 policy on 16 March 2020.

Comparing data from 16 March 2015-19 the CRIS team found that over 80% of crisis days at SLaM were accounted for by inpatient care, 75% were used by patients who were current or recent Trust patients at the start of follow-up, and highest numbers were used by patients with a previously recorded schizophreniform disorder diagnosis.

For current/recent patients on 16 March there had been substantial reductions in use of inpatient care in the following 31 days in 2020 but no significant change in total non-inpatient contact numbers.

"The wealth of information in the health record is allowing us to learn from previous years what we might expect in the year ahead. Taking advantage on the 24-hour updates from CRIS, we are putting in place monitoring processes to warn us early if demand on particular services moves beyond that previous experienced."

“While it is reassuring to see that the mortality in SLaM service users has fallen back to 2019 levels, the number of deaths from March to May are still clearly concerning.

We believe that the excess mortality is higher than would be expected in the general population, reflecting the vulnerability of mental healthcare service users to this and potential future outbreaks."